[DIY051] DJ Phono – Welcome To Wherever You´re not

In June 2011 DJ Phono will release his first Album on Hamburgs record label Diynamic. “Welcome To Wherever Youre Not” is a work of heart, of emotions of awakened, flourishing, and unrequited feelings. Its something of a kind that could neither be accomplished within a nights work nor even in a cycle of nights, but only in good time. DJ Phono and his producer Jimi Siebels (A DIFFERENT JIMI / EGOEXPRESS / ITS RECORDS) allowed themselves to take this time, two years, to be precise. I didnt work consistently on this album, but waited for those moments, that enabled me to work out of a certain emotion. This very often made it possible to capture this momentary emotion within my music. For me these are those sublime moments, that a musician is sometimes lucky to have the feeling of being able to manifest a mood in music. Music and musician as a medium, if you like… During the last year, I was often in an emotional state that led to these kinds of moments and allowed me to do just that. And of course Jimi is a very special character with a discerning sense for little inconspicuous details. The outcome “Welcome To Wherever Youre Not” is an album that DJ Phono likes to hear himself. And Jimi probably does as well. It defines itself in an interjacent, between here and there, between main floor and backroom, between big and small, between yesterday, today and tomorrow, between pop and club, or in short: in between worlds. At Hamburgs fish market, not far from the Pudel Club where DJ Phono feels at home, they will lament the amount of meat being displayed while at the Schlachthof meat market, just opposite of Phonos studio, some say they sense the smell of fish. The florist around the corner however is full of praise for the wide variety of rank growth. One quality all 12 songs from “Welcome To Wherever Youre Not” have in common is their remarkable fashion of elegant reserve. They politely, cautiously, discreetly ask for a bit of attention without letting themselves get hustled into oblivion. Soll ich ein Loch graben? however stands out as it unfolds into an imposing 8 ? minute (rave) drama: all the hands go up in the air when the bass drum finally kicks in towards the middle of the song. Yet in the end even this rogue result appears as the nice, little brother of those saw tooth monsters. There is no danger of dehydration, blackouts or serious organ failure. Instead this musical smiley just spreads sunny euphoria. The rest is euphony. Björn Beneditz (WCW Gallery) and Carola Wagenplast (Jochen Schmith) took up on the essence of the music, which inspired the creation of a sublime booklet bearing the hallmark of “Welcome To Wherever Youre Not”. Each album will be handcrafted and is therefore an individual piece of art. DJ Phono will be introducing this album live. For this reason he has collaborated with the world famous and stylistically leading artist group JOCHEN SCHMITH – who are renowned for their conceptual works in rooms and spaces and have developed a one of a kind stage show that will be introduced on occasion of the release tour in Autumn 2011. Together they have concieved a delicate and yet serene chorography made of silicon crystals and computer science in the context of club music. Self-constructed prototypes made of robot technology perform a mechanic dance notation and sanctimoniously seduce girls and boys. Sound and visuals coalesce in a symbiosis and let us reach the destination of our voyage.
Shubha yatra. 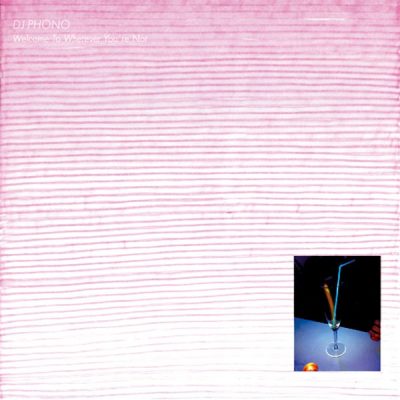 [DIY051] DJ Phono – Welcome To Wherever You´re not